2022 Winter Olympics: Back to Beijing

The Olympics is coming back without a delay and with domestic spectators. It takes place February 4 - 20 and the Paralympics take place March 4 - 13.

Excellent… hopefully it can run as planned.

The NHL is dropping support due to Covid-19. That’s unfortunate. The men’s event will be an easy with for ROC again.

NHL players and teams were understandably concerned about being stuck in China for up to 5 weeks if they tested positive. The way the omicron variant is ripping through the league right now (a league that is fully vaccinated, minus one player, Tyler Bertuzzi, you selfish fucking idiot) I think that was a very valid concern. The number of players in the Covid protocol is looooooooong.

I’ll also note that the decision not to go in 2018 was made by team owners; this time, the NHLPA was in agreement that they should not attend Beijing.

Most athletes are in Beijing by now. Unfortunately a few already aren’t able to compete due to positive Covid-19 tests.

I greatly anticipate seeing if Team Shuster can defend their Olympic title. This was my favorite moment from 2018.

I am so happy for her. The first medal was all she was known for for 16 years because that was all nbc would talk about. Now she got her redemption and how many athletes are still at the top of their very physical sport 16 years later?

This had me cackling at lunch! 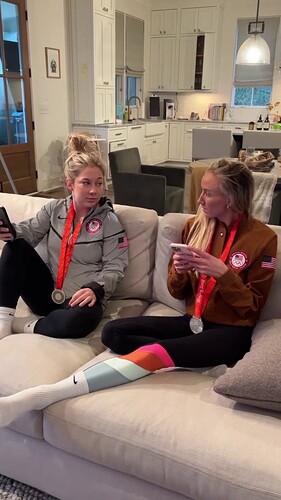 By far, my favorite story to come out of these Games.

Jason Brown and Shaun White with short hair make me feel terribly old. Which I am. But still.

I was so happy for them! I cheered really loudly.

This was a great event to watch (I’m a fan of all the new mixed team events) and I was really happy for the winners. Thank goodness the Jacobellis grab was routine this time.

I really like the monobob. Now they need to add a version that has someone go down the track on a snowboard. Or ice skates. We have laying and sitting versions, next up: standing!

The snow in Beijing was really pretty. (and now it is snowing here so it is feeling more wintery after the 65F/18C weather yesterday when I was sweating in the sun.

How is it that the Winter Olympics ended up with more backflips than the summer Olympics?

I got into my four year fan curling obsession (been hooked since Nagano) early this games with the mixed doubles. I’ve watched as many team matches as possible and it has been quite a ride. That GBR vs SWE semi-final was something else though. What a stressful three hours! Much worse than watching a Downie UB EF! Really proud of both the British teams and I’ll be biting my fingernails during both finals. Will be a long day tomorrow, 0645 start for the men on Saturday and then 0100 Sunday start for the women.