Anyone want to judge these with me?

I’m surprised she didn’t break a 50. Will see when I actually judge them.

Shame about the middle pass on floor because otherwise that’s a very well constructed routine.

And interesting to see how they evaluated the straddle on beam.

Oh my god I just realised she’s missing a leap series on floor!! Maybe not quite so well constructed as I thought

What a silly omission to make. Who is coaching her?!

And no fwd grip on bars. Counts a B dismount.

Now i’m starting to see why she scored so low.

I am just glad to see her able to compete elite again. She had some form issues on bars but she’s just a beautiful gymnast to watch. Hoping she can make it to the Olympics…which I think she can with those routines. Just needs to polish them up and upgrade a bit.

Just in! Aleah propelled Team PHI to take the gold medal in WAG Team Event at the SEA Games in Hanoi. She also clinched the silver medal in the WAG Individual All-Around.

Aleah could’ve won the All-Around had she not made some mistakes in FX.

But I hope she wins the vault and FX gold in individual apparatus events.

Who won the AA?

Rifda Irfanaluthfi of Indonesia was 1st
Aleah Finnegan-Cruz of Philippines was 2nd (She added her mother’s maiden name I guess) 49.250
Rachel Yeoh Li Wen of Malaysia was 3rd.

Malaysia was favorites for team gold but had multiple injuries and Farah Ann decided to retire before this meet so Malaysia was unable to field a full team.

This is Philippines first ever SEA games team gold.

It’s a shame to miss her, she could’ve had a really big year.

aaaand she lost the AA title by 0.4 facepalm

THIS! That missing leap series hurt her score. Scheduled events today are as follows:

The Games website is never update on time so we don’t know which athletes/NOCs qualified for the finals. But I expect Carlos Yulo and Aleah Finnegan-Cruz to be in there. 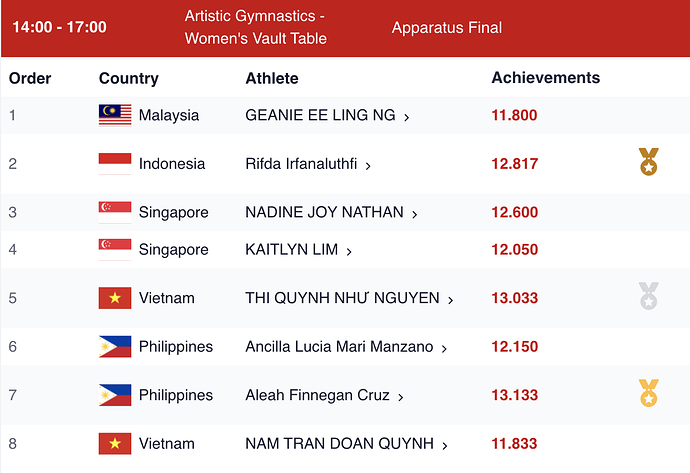 I do feel that the AA title should have been a comfortable win for Finnegan and that the issue here was following the rules.

A) Not having a leap series on floor is just plain silliness. She could do one with literally no preparation.

B) She can do a front giant and a Weiler half. Either of those would have gained her at least 0.5 on her bars score. I can understand why she didn’t do a D Dismount — her double front was never a routine highlight.

C) The beam routine she did for college was a great set — adding the lovely mount was a wonderful improvement (and an extra C). I get why she changed her dance series to end with a straddle jump instead of a split jump – so that she could use the split jump later and get 0.2 bonus. But (a) she probably lost that 0.2 in deductions for rhythm on both connections anyway, and (b) she had a major break on straddle jump, which also probably had a shape deduction. Would have been better to keep it out.

5 Golds for Yulo. The video below is a nice summary of his work except for one error: he tied for gold on high bar, not silver.

That 2.5 + front double pike is really cool, and he follows it with the best full-twisting double layout ever done, man or woman.