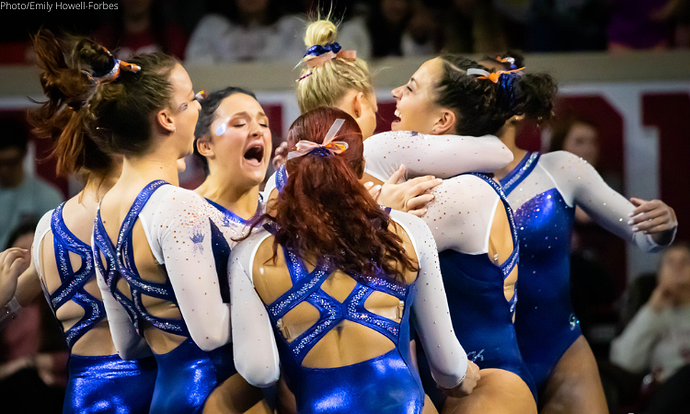 College Gym News Pre-season Poll
No surprise Florida is #1 with Utah super close at #2. I agree with both of these teams and think they will be fighting for the title. Michigan will still be strong as will LSU and Oklahoma will look to try to make it to the Four on the Floor again without standout and 21 NCAA AA champ Anastasia Webb.

This poll is not the same as the coaches poll. 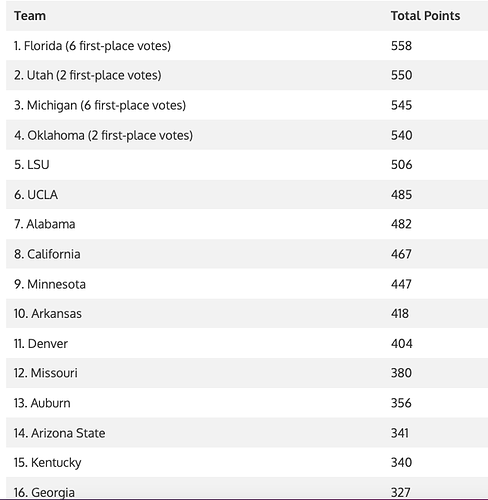 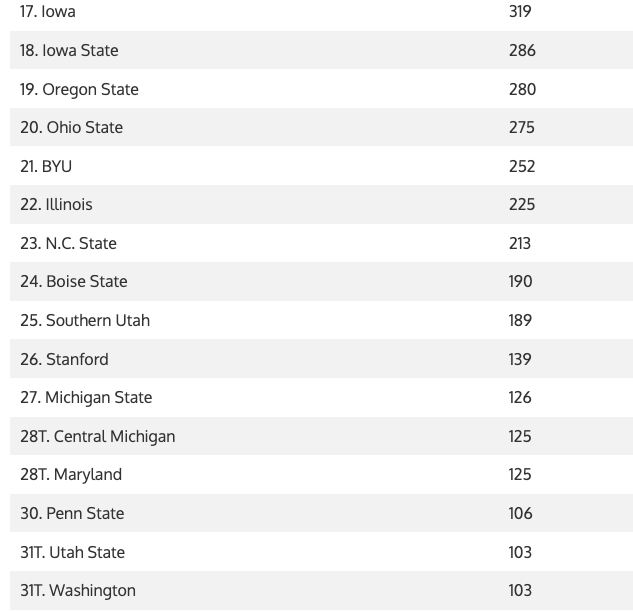 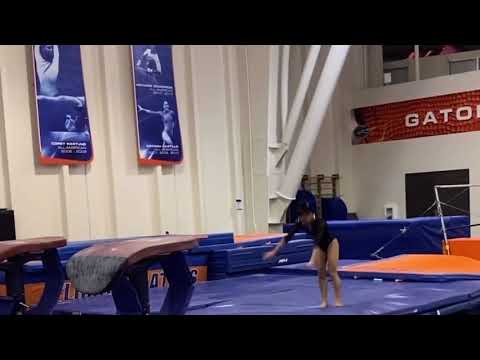 Don’t be surprised if Wing sticks with a Pod instead of a DTY.
The DTY doesn’t always score as well as a Yurchenko 1 1/2 of FTY in NCAA because of the needed stick. DTY are harder to stick cold, unless you are McMurtry or Maloney. Shallon Olsen isn’t the Bama anchor for this reason.
That Pod looks decent enough and if stuck like that will be getting 9.950 each time. A bit of clean up on execution and she could get a 10.
I want to know her floor composition Triple full open, 1 1/2 to layout, barani, or full and a double pike/tuck will be plenty.
She also has an option of 2 1/2 to punch pike.

more importantly, has she gotten rid of that stupid bow yet?

more importantly, has she gotten rid of that stupid bow yet?

Probably not, NCAA loves its bows…We will also likely see her with NCAA hair and not the tight bun we saw from her previously.

Wong could be a star in NCAA. This next season could be great.

I want to know her floor composition Triple full open, 1 1/2 to layout, barani, or full and a double pike/tuck will be plenty.
She also has an option of 2 1/2 to punch pike.

That triple full is just lovely too.

@DrSam_PhD
Leanne Wong’s Pod looks even better from this side angle 🥰 https://t.co/LJPPcrQDq8

@Doug1233 that Pod looks even better from this angle.

Definitely could have won a medal at Worlds. Maybe even silver.
I think she will go with this vault during NCAA season as it seems she can stick it and she rarely was able to stick/semi-stick her DTY, which is really a necessity.
It will score well since it is a Pod and is seldom seen in the NCAA world, especially if it is pushed back later in the line up and/or anchors vault behind Thomas, Schoenherr, and Reed.

Then they have some depth with Baumann, Lazzari, and Richards have strong FTY that can go in the line up at any point.
Perhaps if Richards is consistent with her 1 1/2 they will use her as the anchor to try to get six 10.0 vaults in. She can go for the 1 1/2 if there are 5 big sores before her or do the full if they need a safe vault in spot #6.
Florida at least has the options they didn’t have last year, when they scrambled a few times to get a 6th vault when Thomas was injured.

Crazy that Lazzari and Richards, both of whom did the AA in many meets might not make any line ups due to the Freshman class coming in.
Lazzari will still likely go on BB as she was consistently getting 9.900-9.950 scores and they will want that solid work either anchoring (Baumann and Clapper will say otherwise) or leading off. Based on how BB was an unstable event, Florida would probably put her as lead off. Letting Skaggs, Thomas, Baumann, and Clapper build scores for Blakely, Wong, or McCusker to anchor.

Chiles had her practice with UCLA.

Has Georgia ever finished at the bottom of the SEC? Cause it looks inevitable this season.

I’m not from Georgia but we’ve lived here for 6-7 years. We’ve had two boys here, I’ve taken my oldest son to meets here. I’m not … Proud. We are in for a hot mess of a ride, this is not exactly the pride of UGA I had hoped to witness, but I will bring. The. Pop. Corn.

Yea.
It is heavily rumored that if Kupets doesn’t have an amazing season, she will be ousted at the end of the year.

At this point, Arkansas is on the rise and brings in Leah Smith, Missouri has Helen Hu back and their best ever Freshman class, Auburn has Suni Lee and adding Sara Hubbard’s 1 1/2 to give another 10.0 to that rotation.

Georgia is really going to struggle this year to break out of 8th position in the SEC. They might get lucky and knock off Kentucky.

But yeah it will be a blood bath to make it into the Night session of SEC. Florida, LSU, Alabama are likely to be at the top so that 4th spot is going to be a fight.

It is heavily rumored that if Kupets doesn’t have an amazing season, she will be ousted at the end of the year.

As Spencer pointed out in his preview, Durante was axed after her 5th season, with better results than anything Kupets has achieved…