Complete coverage of the 2022 NCAA women's gymnastics championship, including the selection show, scores, and updates.

At this point, regional distribution makes zero sense. Just seed the teams according to rankings. 29-36 are automatically play in teams.

I would love to have someone in charge of the draw explain why they put Boise St in the Norman regional, cause it’s 3x the distance there vs Seattle from Boise.

Because it has changed through the years and I have zero brain capacity (major trauma happening in my life right now) to remember, how do Regionals work in regards to who competes when? Like I want to go to Raleigh but who would compete Friday and Saturday? The first night is the ‘play in’ but there are 4 times listed so I am confused. Talk to me like I’m 5.

There are 9 teams in each region. Technically(because the NCAA makes weird decisions on who is in the play-in), the 2 lowest seeded teams have a dual meet on Wed with the winner advancing to one of the two regional semifinal quad meets. The top two teams from the early and evening quad meet sessions advance to the regional final quad meet. The top 2 from the quad final advance to nationals.

So the times you see:

So when do they announce who is in which semi final? The Raleigh regional ticket page makes it look like they’re two separate days which is why I was (am) confused. There are tickets listed for Wed, Thurs, Fri, and Sat.!

ike they’re two separate days which is why I was (am) confused. There are tickets listed for Wed, Thurs, Fri, and Sat.!

Here is the bracket: 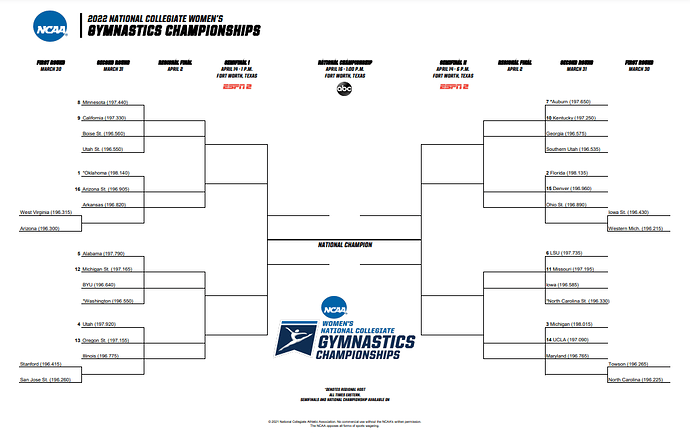 Thank you! I kept looking on the NCAA website and couldn’t find anything. And I have to say, I’ve been MIA for a while and wish I could read/reply more. I miss everyone. I joined wwgym in like 06. One day life will get a little easier.

I feel reasonably confident that the national title will go to either Florida, Oklahoma or Michigan. I don’t see any other team coming close. Assuming these teams hit 24 of 24 routines. Of course, if one of them stumbles in a regional, the parity is there to get shut out. Should be an exciting regional weekend. I think the easiest (relatively) is the Auburn regional, it would be tough to see a depleted Denver doing much and while Kentucky has had a solid season, just don’t see them threatening Florida or Auburn much. The Raleigh seems the hardest with LSU, Missouri and UCLA fighting for the 2nd spot. Seattle could get interesting since we don’t know the injury status around Alabama between Makari and now Luisa and they have to travel across the country and 3 time zones.

Thank you! I kept looking on the NCAA website and couldn’t find anything. And I have to say, I’ve been MIA for a while and wish I could read/reply more. I miss everyone. I joined wwgym in like 06. One day life will get a little easier.

One day life will get a little easier

Hi how is the kiddo?

LSU, Missouri and UCLA fighting for the 2nd spot.

I have Missouri sneaking past injured and inconsistent LSU.
UCLA is weak on vault and that will hurt them IMO

Utah also has a good chance to win the whole thing. 24 for 24 last year and they lost 1 of those championships routines but have so much more depth with the freshman.

Who Will Qualify As Individuals?

From each of the four regionals, one all-arounder and one athlete on each event (who aren’t part of a qualifying team) will advance to nationals as individuals. Thursday’s scores will d…

Sucks that it’s all only on ESPN+.

Things are neck and neck between Towson/UNC at halfway point. I’m impressed how well UNC has done despite losing AA star Dekanoidze and Thompson to injury. I figured their season would end with them just barely missing regionals again. Judging seems fine through two, a couple routines I would’ve had scoring lower here and there but I think they’re trying to rank the athletes properly which is nice to see.

Here is my bracket. I might be heavy on the upsets in play in and also regional semi finals.
I have Illinois besting Oregon State, Maryland having a great day to pass inconsistencies from UCLA, and Ohio State knocking out Denver.
My regional semi final upset is Missouri over LSU and Michigan State over Alabama (with no Luisa Blanco). 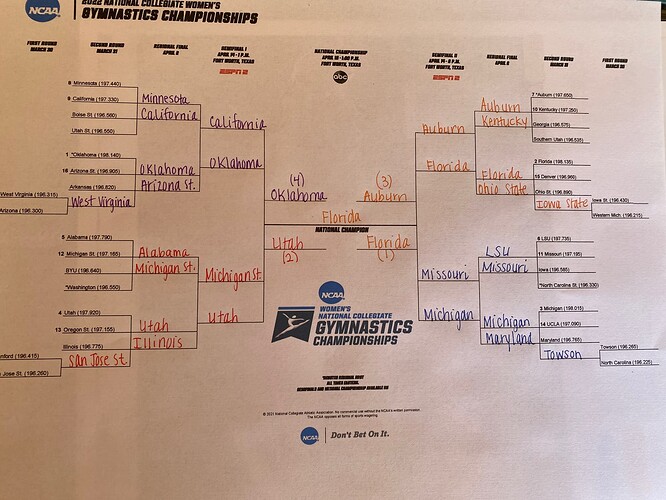 With the level of talent across a wide range of teams in NCAA increasing, it’s a shame there’s only 1 AA/event specialist qualifier per regional. They took away event finals, is it too much to ask for a second aa/event qualifier?

It’s because there are only 8 teams at Nationals so 1 AA is with one team x4 then the EF specialists are spread across the rest. So each of the 4 remaining teams have an “AA” slot but they are for specialists.