We now have the detailed gymnastics schedule. Squee!

Friday 29th July is MAG team, Saturday 30th WAG team, Sunday is both AAs. MAG starts at 9am, which seems as good a way as any to guarantee a minimal audience, WAG is the afternoon. Then Monday 1st August is the first half of the EFs and Tuesday 2nd is the rest.

I got an email this morning confirming that West Midlands residents can apply for tickets as of July, and they go on general sale in September. Apparently the cheapest tickets will be £8 for kids and £15 for adults! I presume those will be as rare as rocking horse shit, but hopefully indicates that the prices will be a bit lower generally than Liverpool worlds, which I know several gymternet people have been priced out of.

Anyone planning to go? I am. I want to go to ALL OF THE THINGS after the year we’ve had.

I’m interested. in going but I’ll wait and see.
The schedule seems pretty gruelling if people qualify to AA and a couple of EFs.

I mean it is grueling, but it’s not like the schedule has changed since 1990 when gymnastics returned to the CWG and the athletes gotta get used to it if they want to compete at Worlds or Olympics, which also includes a team finals portion.

I plan to go if I can get tickets. I was thinking of volunteering because that was really fun at 2014 CWG. However since it will have been so long since live gymnastics by then, I think I might be happier knowing I can watch everything and not worrying about getting a role away from the field of play/in another venue.

No tickets for me! I hadn’t realised the gymnastics would be so popular. Anyone have any luck?

I only managed the first session of MAG team and day 1 of EF after asking for everything in the highest price category. A friend got absolutely nothing across multiple sports (though they were going for 4-5 tickets per sport) and another friend got all the gymnastics because they had BG priority. I must have missed that e-mail so I’m a bit annoyed with myself. I’ve only recently become a BG member again so it’s frustrating not to have made the most of it.

Hopefully we’ll be able to pick up gymnastics tickets from the general sale and resale.

I did get a lot of my non-gymnastics requests: opening ceremony, couple of athletics sessions, netball, table tennis and badminton for some variety. I failed to get squash and diving.

Looks like all the gymnastics tickets went in the ballot. I’m still hopeful that I’ll be able to pick up some resale sessions. It’d be ridiculous if I fail to get to a home CWG when I (eventually) managed to get all the WAG tickets I wanted at two different Olympic games. 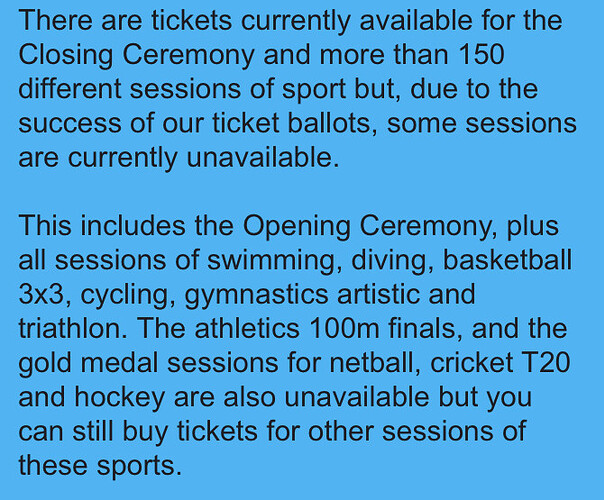 I got that too. Thought that was it, are there more resale sessions?

It does seem kind of batshit as you’d normally expect the Olympics to much harder to get tickets for… I think maybe covid is playing a part here though. People have FOMO.

Venue size at CWGs is much smaller than Olympics usually. I have tickets for WAG team final.

It usually is, although the UAB can hold over 15k which isn’t too far off the Greenwich capacity. I just had no idea so many people would be interested. Congrats on getting tickets.

Congrats on getting a WAG TF ticket MaryClare.

I went to the 2002 and 2014 CWG and those venues had very different capacities. I guess we should be happy that gymnastics is so popular right now. When I mentioned worlds in my sci-fi book club circle (infamously anti-sport with a couple of exceptions) I was asked if “the twins” were there. They made quite an impact in Tokyo.

I wonder what they will do with the Anniversary Games next year? They had to move it away from the Olympic stadium this year and the 2022 calendar is pretty packed. Could it serve as a warm up for the summer events? Would the field be too weak if many CW nations/Europeans skip it? The Anniversary Games have been a great event and it would be a shame for it not to happen on the 10 year anniversary.

I got that too. Thought that was it, are there more resale sessions?

They previously mentioned a resale website for people returning tickets they could no longer use. Low probability of success but worth keeping an eye on.

I got tickets for Glasgow in the ballot which I found really stressful. Then friends got them in the second release. And then more friends got them in the returned resales. And they got better seats than we did. And then we decided once there to go to event finals on the day and got tickets at the gate from on the day resales. So this time I refused to panic and do the ballot.

There is a returned resale sale in May if anyone didn’t get what they want this time.

Glasgow was the same. It was crazy difficult in the ballot.

I’m still in the queue (2.5 hours) and so far gymnastics isn’t listed as one of the sports with limited availability.

It was a bit confusing because the session info and buy session buttons weren’t aligned correctly. I also accidentally turned on the accessibility option to read everything my mouse hovered over out loud! (turning it off would have refreshed everything). Hopefully I got it all correct in my rushed state of mind. Really must go to work now!

Ah fuck I forgot about this entirely and been out all day. Never mind.

Gymnastics isn’t on the list of events with limited availability so there might still be a chance.