Is CKC for sure renewed for next season? Sounds like they are keeping her

Is CKC for sure renewed for next season?

I am sure that Josh Overton got thrown under the bus and blamed. Bars was ranked 27th, but their worst event was beam which is ranked 30th. Beam being Kupets event. VT is coached by Jason Vonk and that has consistently been their best event the last few seasons including 14th this season.

Danna Duckworth did something similar when Bryan Raschilla was fired from Alabama. 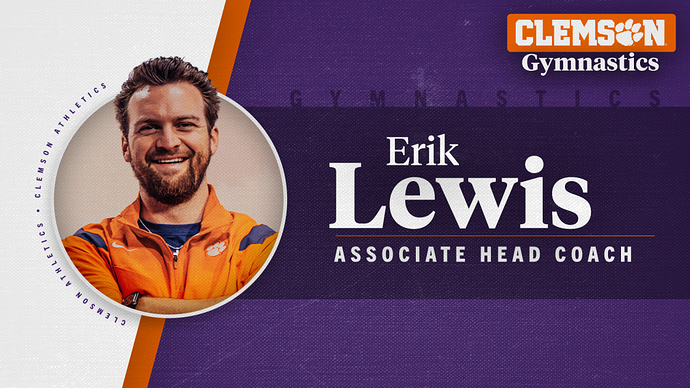 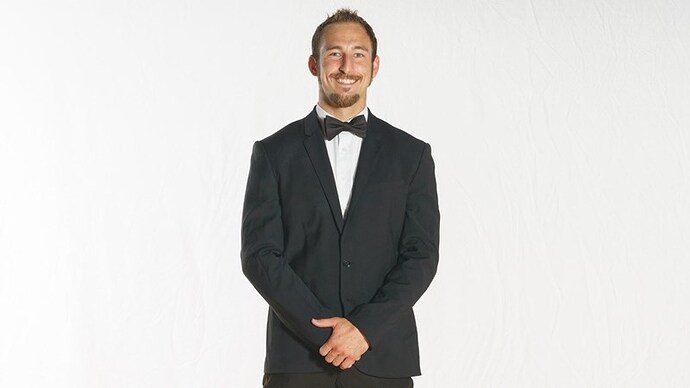 That will leave Utah State with 4 vacancies. Abby (Milliet) Hood will obviously move with her husband and there is a volunteer coach position open at Denver.

Bad news for Utah State, but then again smart move for Hood as a new head coach would likely want to hire new assistants. 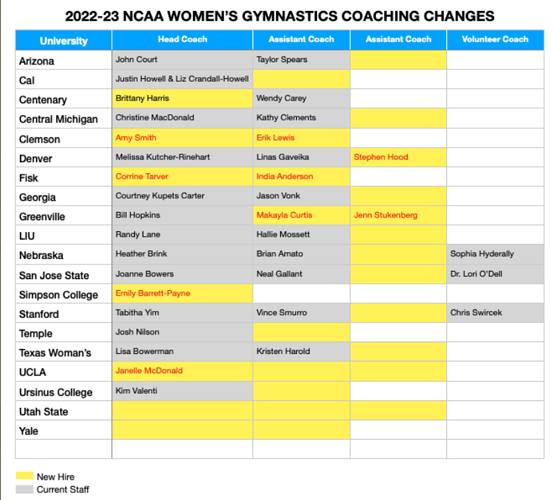 Rumors were flying that James Williams, bars coach at San Jose State would be taking the AC position at California, since Janelle leaving means a need for a bars coach.

But apparently, Williams is leaving coaching and entering business World if you interpret Joanne Bowers’ tweet. 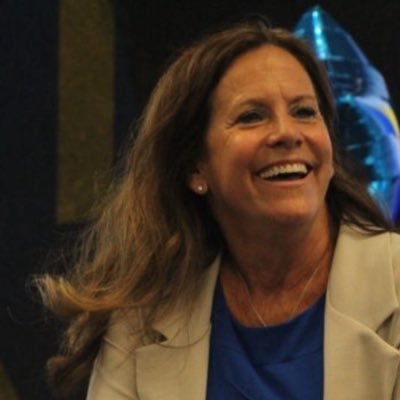 @CoachJoBowers
Thank you to James Williams for the incredible passion/support/care he has given the Spartan Gymnastics Family the past 4 seasons. We wish you all the best as you use your business degree here in Silicon Valley to thrive in that world. We love you and wish you the best. https://t.co/L62NsmjTuA 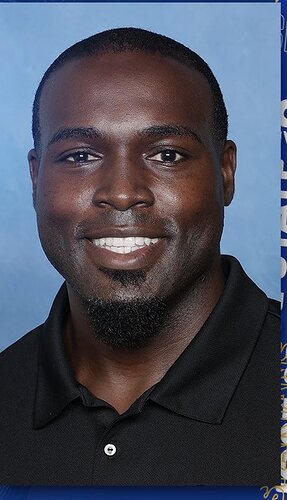 I didn’t expect this one

I am not surprised at all.
It was rocky with Alabama for a bit and while results did improve (2021 SEC champions), I am sure that there were behind the scenes expectations.
Alabama hasn’t made team finals since 2017 where they were 6th and their best under Duckworth was 3rd in 2016.
These overall results are simply unacceptable for a team with history like Alabama.

You could absolutely see that Duckworth’s heart was not into her role this year. It was evident to me by her interviews that she was uncomfortable and she didn’t have the same spark in her eyes.

Her contract was up this year as well IIRC, so this might be the politically correct way for her to bow out gracefully…citing wanting to be there for her family for now, but also leaving the door open for her to return to NCAA coaching at some point.

She also received a great deal of criticism for the removal of Bryan Raschilla, who was beloved by the fans and the gymnasts. But a coaching change he ended up getting the brunt of that decision.

Interesting.
Someone pointed out at the College Gym Fans twitter that Robert Ladanyi just left Nebraska very quietly which maybe indicates that Nebraska might be letting Heather Brink go and he saw the writing on the wall and bounced while there are lots of coaching vacancies (Utah State ???). Also it is interesting that Ladanyi’s daughter Gabby is verballed to Alabama for 2023-2024. So maybe there were talks with Ladanyi to take over Bama’s program when Duckworth was set to resign.

IMO Ladanyi will end up at Utah State and Ashley Johnston will end up taking the head coach position at Alabama.

Did not see that coming, I honestly don’t think it was performance. Especially when contrasted with the crap show at Georgia (I know they are separate programs but still). I know her first couple of years were a bit rocky, but the trajectory of the program is solidly up. The last two years they were peaking at the right time, they have a robust recruiting cycle of athletes these last couple of years including this year. And given the current competitive NCAA gymnastics environment, I am not sure any reasonable person could expect better results. I genuinely think she is stepping down for personal reasons, I think her daughter is almost graduating high school, and maybe there is some family issues that need to be sorted out (I want to be clear, I have no idea,rumor etc that this is true).

The family situation could be legit. It just seems unusual as they aren’t young children like Ray and Kupets have, which is typically when someone would devout more time to family when they kids are all younger.
But maybe there are family issues that need to be resolved.

Duckworth hasn’t had much time away from the program putting in 27 years. 8 years as head coach, 15 years as assistant coach, and 4 years as volunteer coach. She was also a student-athlete from 1990-1993 so really more than half her life has been with Alabama gymnastics. So maybe it really was time to take a break.

I’m genuinely surprised by this, considering her contract was renewed last year up to 2025. Of all of the SEC coaches, Dana was one coach I would’ve have pegged for leaving at the end of the season. Results for Bama have been fine the past couple of years, they were solidly in the top half of the SEC all season. The future was looking good for them, at L10 nationals, something like three of their commits won the AA in their age division. People on FB are saying that she was even at L10 nationals over the weekend. Wonder if any of their commits for 2023 will switch before signing.

She was absolutely at Nationals this past weekend, as i spoke to her briefly.

She was at Nationals this weekend, but I will say that my perception was that she seemed to take a more low key, background approach. She just came off to me as a bit more subdued from what I observed. I wonder if there is a family illness that has cropped up, and while her kids are not young, trust me when I say that often it is more important to be present during the teen years than the toddler years. Kids can easily go off the rails quickly today during those ages. I certainly hope and pray that she and her family are all okay.

Forgot to ask, does anyone know when CKC is due with her baby? I saw her at Nationals and she looks great but I honestly can’t tell how far along she is. She is so tiny in general and looks like she just stuffed a basketball under her shirt! (What I would have given to look like THAT while pregnant!). Just curious because camps etc are coming up and wondering how she will run those being down a coach AND potentially on maternity leave.

I’m genuinely surprised by this, considering her contract was renewed last year up to 2025

Thanks. For some reason I forgot that and though her contract renewal was this year.

Yup.
Gabby Gladieux (2023)
Chloe LaCoursiere (2024)
Lily Smith (2024)
All won their respective groups.
Meaning that Alabama commits won 3 out of 6 sessions.
Additionally, Jamison Sears (2024) who also won Nastia Liukin Cup this year would have won her session had it not been for an 8.900 on bars.

Meaning that Alabama commits won 3 out of 6 sessions.

3 of 12 sessions… both Jr’s and Sr’s are running during each time slot.

3 of 12 sessions… both Jr’s and Sr’s are running during each time slot.

I was counting just the seniors as the juniors are not eligible to commit IIRC.

Some Jr Fs are 2023 class and able to commit but not many.

I was counting just the seniors as the juniors are not eligible to commit IIRC.

Got it… that makes sense.