Day 2 is almost over, but here is a link to watch:

Paul Juda - maybe he will sneak in to win the NCAA AA Championships?
I haven’t had a close look at the numbers …but maybe.
I can see him on a World Team …we will see.

We haven’t seen Brody do AA this year. It will be interesting!

Love this routine. In spite of the lack of “feminine grace.” 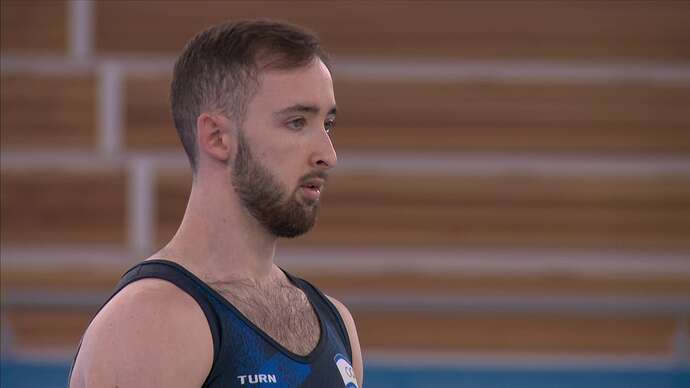 The men have their poise, precision, power and presence. Women can keep the wolf turns.

I miss the 80s style floor routines. If I only wanted to see the most impressive tumbling, I’d watch DMT/tumbling.

Just flomping back and forth on the same diagonal. Sigh.

This is one of the only MAG i’ve seen in recent times to make floor look like a routine, not a tumbling set. Belyavskiy in his early days was enjoyable too. I can’t think of any others of the top of my head.

It’s like MAG reacted to being called queer/pansies by getting rid of everything that was enjoyable back in the day and removing any “femininity” from floor, that’s the only way I can rationalize it.

It’s like MAG reacted to being called queer/pansies by getting rid of everything that was enjoyable back in the day and removing any “femininity” from floor, that’s the only way I can rationalize it.

This is why I love Heath Thorpe. He is out and proud as a gay man and is unapologetic when it comes to how he presents his gymnastics. There are several gay and non-binary NCAA gymnasts that also present their gymnastics the way that they want to rather than stereotyped presentation.
Jackson Harrison brings back the 2000s Russian WAG realness with his salute.

I don’t see what’s feminine about the routine. I enjoyed it, he’s more flexible than average in MAG and it was nice to see that in his leaps. But I wouldn’t say it was at all feminine

Yeah I don´t necessarily need “grace” or “femininity” or whatever. I just like it when it´s a performance, so it´s not diagonal-pause-diagonal-pause-kind of get myself to the other diagonal-diagonal. Just do some break dancing moves or something acro-y to get yourself from a to b, whatever. Current floor routines just look more like 4 or 5 vaults performed one after the other than a floor routine.

What I meant by femininity, is that in the US at least, there is a very strong cultural assumption that male gymnasts are gay/sissies/wusses. In my experience, most cishet men here still think of it as a girl’s sport and would feel emasculated doing a split or a sissone. Hell, I think we did a couple ballet exercises when I was around 15 and you would’ve thought my teammates were being asked to eat glass or something. Like how wearing the color pink would signal a “feminine” man, an easy bullying target, at least in my experience as a youth in the 00’/10’s. Nothing to do with actual femininity, sorry if that was unclear.

in the US at least, there is a very strong cultural assumption that male gymnasts are gay/sissies/wusses.

Haha, it’s so weird because in Russia, mens gymnastics is the ultimate alpha tough guy sport

Interesting. Reminds me of a paper I read on how in countries where homophobia more normalized (S.Korea, Russia, Japan were the ones I remember it mentioning), contact between men is less stigmatized/avoided than in countries, such as US/UK, where homophobia is somewhat controversial. They gave an example of young Korean boys touching each other in non-intimate ways without any alarm of homosexuality, versus the US where a lot of men are even afraid to sit too close or touch another man in any way.

Haha, it’s so weird because in Russia, mens gymnastics is the ultimate alpha tough guy sport

I mean that makes logical sense, if you look at what this people (men and women) are doing, it really is very tough and “strong”, even if you look like omelianchik while doing it. What I really don’t understand from my Spanish perspective is that they’d revere figure skating so much, I remember pluschenko in Sochi being a total bro (and being watched and applauded by Putin at the time) while at the same time, by western european standards, also basically being a makeup-light drag queen on ice. I don’t understand the argument for masculinity in this context, or rather, i don’t know what’s meant by masculinity.

the US where a lot of men are even afraid to sit too close or touch another man in any way.

I must say, my experience of the states is that it tends to be more prudish in these things than other Western countries, or at least Europe. I would say, what you say generally applies to people here as well but maybe not so extreme as you paint it there (and for example men from turkish descent, or well some at least, greet each other by kissing on the lips, which is very shocking even to me as a Spaniard -we’re very easy with the kissing-).