Now most teams have begun training, I thought it would be handy to have a big thread to discuss the preseason.

By way of an injury update, Utah’s Lucy Stanhope has been pictured with her arm in a sling.

College Gymn Fans does a weekly update which is super informative.
Here is today’s update: 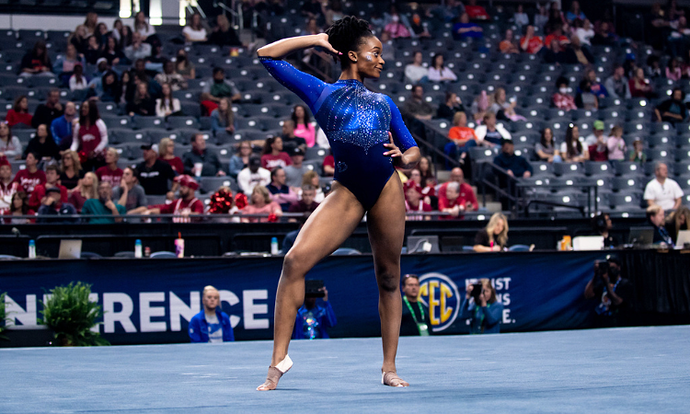 As teams start to get back into the swing of things, more and more training updates will start to come out. Plus, NIL deals and podcast appearances.

I wish teams would post more videos! Love seeing what they are up to, I coached a few and watched many as they competed level 10.

Updates on recent rule changes and increasing or decreasing the value of specific elements. 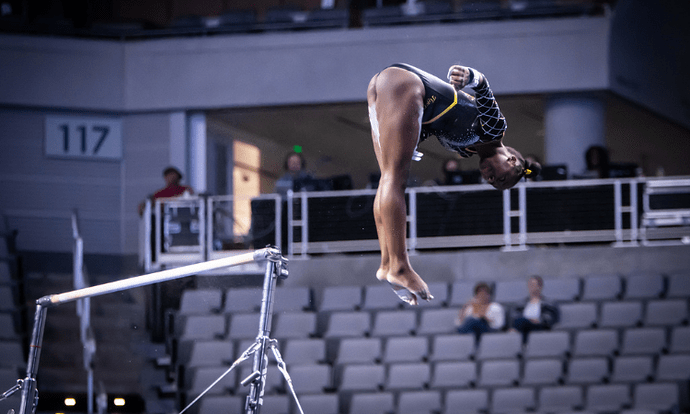 New NCAA Gymnastics Rules, Modifications and What They All Mean

The NCAA Women’s Gymnastics Committee recently released its annual meeting rules discussion minutes. We examined some of the biggest and most surprising changes we'll see in 2023.

The biggest change is that gymnasts are no longer able to do aerial into full dismount, or gainer full dismounts as those are C dismounts and the composition requirement states a D dismount is required.
The back double twist is upgraded from C to D so we will likely see more of these or double tucks.

Also some vaults were increased from 9.900 to 9.950 so we will likely see more front tucks on vault as it has gone from 9.9 to 9.950. The rationale is to hopefully get more variety on vault rather than the yurchenkos. They also are adding direction lines on vault, which should hopefully aid judges in taking the needed deduction, however, the code does not have a specific deduction yet.

The best of all is that regionals will not occur at the same time, two regionals will have a Wed, Thurs, Sat rotation while the other two have a Thurs, Fri, Sunday so there is more opportunity for more fan engagement as the four regionals do not have direct competition with each other. Hopefully there will be more television coverage as a result.

The NCAA Women’s Gymnastics Committee released its annual meeting rules discussion minutes from the meeting on June 6, as well as the complete minutes. We examined some of the biggest and most surprising changes. Keep in mind that the NCAA still needs to ratify the changes, but it’s likely that these rules will stand.

The most notable change is the devaluation of the Yurchenko full-on back tuck. This will alter the game plan of several gymnasts, like West Virginia’s Gillian Fletcher and BYU’s Elease Rollins, who now need to upgrade to a pike or layout to return to starting from a 10.0.

To assist judges in assessing directional deductions, lines will be added to landing mats on vault for a visual aid to evaluate a gymnast’s distance and orientation. The lines will be taped or drawn in chalk onto the mat in a funnel shape stemming from the table, and, as of now, the language suggests there will be no center line and only side lines.

The biggest thing to note here is that, unlike in elite, there is no flat deduction for stepping over a directional line on landing. The lines are simply to act as a visual guide for judges to take the current directional deduction, which can be up to three tenths of a point. With directional deductions seemingly absent from scores in years past, it will be interesting to see how strict judges are in assessing short or crooked vaults.

The most significant change for gymnasts already competing this style of dismount is no-longer needing to connect them for their routine to be up to th level. For example, Missouri’s Amari Celestine can now stick her dismount without having to perform a stadler immediately before it.

In an attempt to mirror the dismount requirements of bars and floor, dismounts on beam must now be valued at a C or higher. This change ends the side aerial to back full dismount era, as dismounting with a D acro element connected to a B dismount is no longer up to the level. Along with this change, the double full dismount was upgraded from C to D, so expect to see a few more gymnasts dismounting with that in the coming seasons.

Handing out warning cards like fans often see in soccer is a rarity in gymnastics. Some fans may not even know it’s a possibility. That’s why this change comes as a bit of a surprise, making us ask what prompted the proposal in the first place. Maybe the rationale will shed some light: “The proposed change addresses repeated conduct issues by the team with a team penalty.”

Are we entering an era of more frequent yellow cards in the sport when coaches —or even gymnasts — act out of line when a score flashes or an outcome doesn’t go their way? Only time will tell, but we can’t help but feel a little excited for the prospect.

In a surprising fan-centric move, dates for regionals will now be staggered to allow for the opportunity for greater viewership. Instead of trying to watch four regionals at the same time on the same day like in years past, now two regionals will follow a Wednesday, Thursday, Saturday format while the other two will compete on Thursday, Friday and Sunday.

While this change won’t affect the actual gymnasts we watch, it’s an important change as it creates an opportunity to grow the NCAA gymnastics audience and sport as a whole. This new format reflects what we see in other mainstream sports’ postseasons, like that of March Madness and college football bowl games, by highlighting the best competitions of the season and encouraging people to watch.

After last season when North Carolina’s Lali Dekanoidze was awarded an individual spot at regionals despite being injured and unable to compete, new rules have been put in place to select alternates for regionals and nationals should qualified individuals forgo their selection. Qualifying individuals will have 24 hours to accept or decline their invitation, and by declining will send their qualification to the next best finisher on the event or in the all around.

Speaking of selection, the show announcing qualifiers to the NCAA gymnastics championships will move back to Monday after being held on Tuesday in 2022.

Video review is going to become more prominent in 2023 thanks to a number of motions passed in this year’s meeting. Now only has the 0.10 deduction been eliminated for a failed inquiry, but teams that submit a request to review can now indicate if they have video available to use as evidence during the re-evaluation process. “When an equipment failure occurs, the Meet Referee may have the option to review video (both real time or slow motion) prior to making a decision.” However, reviews may have consequences as well: “If a score is changes during an inquiry or video review, the skill or connection under review is subject to additional deductions for incompletion or rhythm.”

Eliminating the deduction associated with requesting a review is a baby step in judging reform and slowly cracks the door open wider for more automated judging options. It makes sense to allow the skill(s) under review to be open to additional deductions. For example, if a judge did not award a connection, and that is the part of the routine under review, it stands to reason that the result may be that the connection is awarded but incurs a rhythm deduction. The note about equipment failures also feels timely, after Florida’s bars issues at nationals this past season.

It’s worth noting, too, that we’ll likely see every team recording each routine. Most already do, but don’t expect to see a team on the floor sans a manager or non-competing gymnast with an iPad in 2023.

This is a rather silly change to remove language requiring a minimum width of 2 cm for leotard straps, but it’s exciting to think of the possibilities for even more creativity when it comes to the designs teams create. Plus, the rationale — “the FIG has been liberalized to permit more artistic variety in the team uniform” — gave us a good chuckle.

As somebody whose other main spectator sport is soccer, the yellow card thing isw intriguing, and something I’ve never seen. I’ll need to research that.

Utah posted some training videos yesterday. Looks like Grace McCallum is ditching the Servente for a Yurchenko 1.5, thank god!

Has anyone been stalking the college socials? Anything exciting? Whats happening out there? Cant wait until the season starts!

My most exciting thing is seeing Hurd doing all-around. Great that she has gotten back to at least do all events, we will see if she becomes competition ready and breaks the line-up. Also nice seeing Wong appearing healed from Nationals going to world qualifiers

Preview for Utah will be live-streamed. 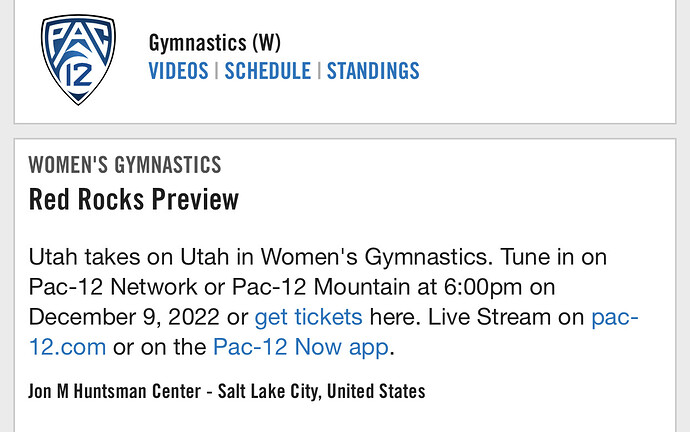 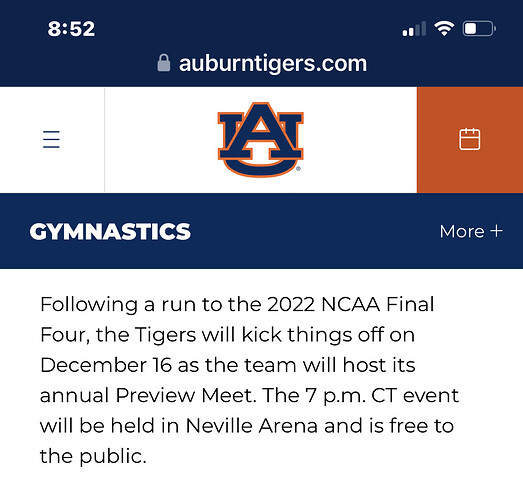 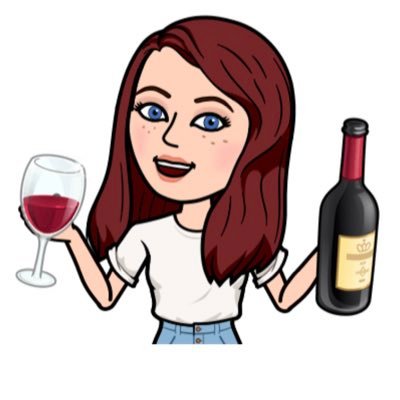 Having watched Utah/UGA’s previews, it seems gainer 1/1 off the side is gonna be the new side aerial back 1/1 this season, and honestly I’m not feeling it. It seems silly to say aerial-back 1/1 is not up to level, but a standing gainer full is.

Maaaaybe if they did the side aerial into the gainer full. Maybe then I would feel it was closer to level. Also shades of Khorkina with that combo.

UCLA Meet The Bruins - Upcoming on Pac-12 Now if you have Sling or some other streaming service to sign in with.

The back double twist is upgraded from C to D so we will likely see more of these or double tucks.

This comment just sent me in a spiral looking at the elite COP lol. I don’t think it would be controversial to state that a beam dismount is harder than its floor exercise equivalent, and yet…