I think I’ve counted four enquiries in the first rotation (CAN, BEL, TUR, USA). Some were even successful!

That stinks for Hashimoto

I’m watching. Zhang and Hashimoto both fell on PH

I saw that Yul inquired about rings, anyone know why?

That pommel horse needs to be burned.

Smudged at the very least. Maybe some holy water.

That triple pike off hb was fab

Nice tight competition going in to the final rotation. Come on Onder!

Just catching up with this now - Souza really needs to work on Pommels to make a serious challenge!

Just noticed Joshua Nathan’s massive 15 on PH - gonna push him into the top 10.

Really cool to see the Turkish guys do so well and featured so much.

I’m going to be honest I had no idea who ilya kovtun was or that he would be a medal threat before today.

Kudos to the crowd, after that shocked silence they applauded Boheng.

Good competition, I enjoyed that. 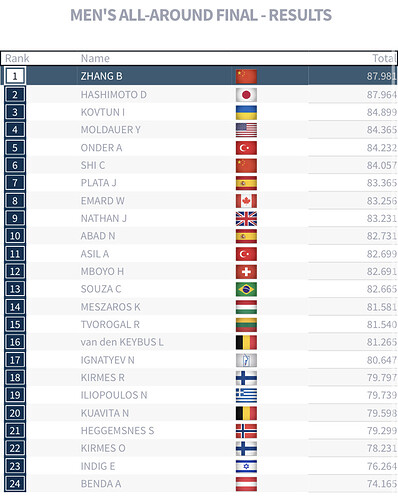 Crazy close. Another exciting men’s competition. Spain, turkey, and china all had two in the top 12. Souza hanging on as long he did was exciting. I may or may not have been dozing in and out during rotations 2-4, but I feel like yul came out of nowhere, at least according to the broadcast. Less than a point among 4 in the fight for the bronze medal is pretty exciting too. He would have had it without the uncharacteristic rings fall. That’s gotta sting a little. Ghost of Sam Mikulak hanging around apparently