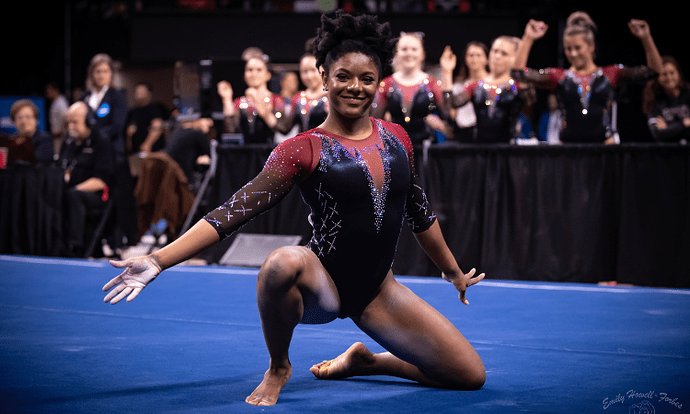 I’m disappointed that not a single Iowa gymnast will be at NCAAs after the great season they had.

Really really hoping for Cal/Michigan from Semi Final 1. Semi Final 2 I’m basically like “maybe Utah and someone who will lose in the final”.

I want Michigan to win. But also Florida. I LOVE Cal and Minnesota too. All 4 of my favs in semi final 1 UGGGGGH.

I know! So many good athletes out. Iowa State too. No Georgia or Auburn at Nationals either. Gutted for Gobourne

Gobourne has been a steady highlight for me too over the last several years. She came, she saw, she dismissed. Queen

This. Getting Suni Lee next year, Auburn is going to be a great team.

I’m a little underwhelmed by the individual qualifiers from the Tuscaloosa regional. I wish Gabby McLaughlin had been able to compete for the BB spot, she’s gorgeous there. Or that Kenlin/Schreiber had gotten that berth instead of Schaffer. Same with McCrary on FX - nice routine but Gobourne/the Iowa girls have superior tumbling/dance imo and would’ve been much more competitive in Fort Worth.

College Gym News has a Nationals simulator for the team event. 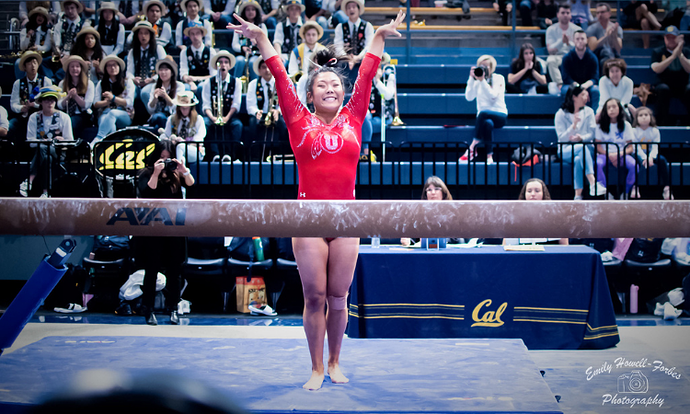 It is a lot of fun to play with. They have Florida as the favorite to win, Oklahoma 2nd favored and Michigan 3rd favored.

I ran the simulator on my own 100 times and I also came out with Florida as the favorite to win, Oklahoma 2nd favorite, and LSU 3rd.

If Trinity is in AA, I think Florida sails through to the finals. I still favor them to advance even if she’s still limited to UB but with less margin for error. I can envision the wheels coming off for them on UB since we’ve Lazzari/Richards/Gallentine get stuck in the 9.7-9.8 range at times this season.

Speaking of Richards, I wonder the extent to which they’ll use her in semis. She’s been off at regionals and SECs, and while it shouldn’t take a massive score to advance, I think it’s worth considering using someone else on FX/UB.

I am so torn over the first semifinal. Michigan’s first national title is within reach, but starting on BB is going to give me a heart attack. A hit VT rotation like in the regional semifinal should give them a huge advantage and their UB is 2nd best in this semi imo. I hope they sort out Wojcik’s FX issues. I want her to challenge for the AA title, plus they need her to be scoring a 9.9 to keep up with UF on FX.

Cal has been my sentimental fav for years, but I think VT/FX is just a little too weak to challenge hit meets from UF/UMich. I love Minnesota but I think their 1-2 spots tend to leave a little to be desired, so getting Remlinger back into VT/FX lineups would be huge for their scoring potential.

I really don’t have much interest in the outcome of the second session besides hoping Alabama doesn’t advance. I wouldn’t mind LSU being shut out either given how overscored they were in SLC, but a well performed meet from them should easily challenge Utah for the 2nd spot, and I love Haleigh Bryant, so idk.

Florida could nail everything and win easily or fail to advance. It all depends on how the rest of the team centers around Thomas.

Richards is injured as far as I know so she will be used in a limited way.

I do think Michigan is right there with Florida.

Not feeling Oklahoma this year at all.

Alabama, Utah, and LSU are too over scored. Utah’s UB rotation is a rough one and should go above a 49.100 if scored properly. LSU’s BB was over scored by about .4-.5 at regionals. The same mistakes here won’t be over looked. Alabama has been gifted all year long, they did win SECs but I thought LSU deserved the title. Luisa Blanco is a gorgeous gymnast but is over scored. Many of her 10s were not legit 10s but as anchor no where to go but up for the previously over scored sets.

In the AA it’s gonna be Thomas and Ramler duking it out with Lynzee Brown right with them. Wojick might make a run if she is having a stellar day. Wonder how Brown’s scores will work out seeing as how she is essentially the anchor for Florida and will follow the last routines. She will be up after Thomas on all events.
Session 2 has O’Keefe, Webb, Johnson, and Blanco that could contend but should not if the top 3 hit cold in the AM session. They do have the traditional high scoring 2nd session advantage though.

Utah’s gotten rude awakenings with UB scoring come nationals for the last 4-5 years, and I agree this year shouldn’t be an exception. However, they are the strongest BB team in the session in terms of consistency which bodes well for them considering we’ve seen the other three have had meltdowns there at various times this season. They definitely aren’t a 197.7 team though.

I think this will be the first time we’ve seen Bama compete outside of the SEC this year, so they are definitely in for a scoring wake-up call. I was only able to watch their regional final on mute, was there an explanation given for why Graber was limited to VT only?

Whether LSU’s subpar regionals performance was due to poor acclimation to SLC’s altitude, or a sign of some serious nerve issues, time will tell, but ending on BB will be an entertaining rotation for sure.

They should also expect a wake-up call with UB scoring. I know the athletes aren’t to blame for the judges incompetence but I soooo want to see Alyona “what’s a scoring range” Shchennikova get judged accurately there for once lmaoo

I am not 100% sure but Graber and Waligora I heard were limited due to injuries.

LSU’s BB has always been suspish this season.

Okay, interesting that Graber was still able to vault. Their floor lineup is going to struggle to break out of the low 49s without her I think.

LSU does itself no favors with their routine composition. They throw way more difficulty than is necessary, and if it weren’t for the lax judging, it would not be paying off. I was hoping the coaching staff would come to this realization after DD retired.

Of the top of my head, at least half the BB lineup is attempting switch to switch 1/2, well short of position (not to mention rhythm deductions) which in theory is a dumb combo for NCAA gym, but the judges seem unwilling to take appropriate split deductions to separate the athletes. Shocker.

Don’t get me started on Dean going 9.925 with bent knees in her series and short splits. Like, of all the LSU gymnasts to prop up, they choose the routine with the most built-in deductions LOL.

Vault is the only event where I enjoy LSU’s lineup from start to finish. Bob Moore is an excellent vault coach.

I can see just doing VT if you have a slightly injured arm, shoulder, wrist, leg, etc. It is a short performance and adrenaline can usually get you through one vault.

Thanks for sharing, Rich, I hadn’t seen that. Without her at full strength, a finals run seems unlikely. They can manage without Waligora, but I hope she can at least do UB, her dismount is the best on the team.

Emily Gaskins competing AA was the highlight of Bama’s regional performance for me. I felt she could have been an NCAA superstar before coming to Bama, so it was nice to see her deliver on that potential, crack scoring aside.

Ok. Why did Cal leave the warm ups for 42 min and then come back. KJC stated “they were out of the competition and then back in”. What on earth happened

ok, nevermind. they finally said that it was some weird covid protocol contact tracing…then nope, they are fine to compete. What unnecessary drama for that team!

Nooooooo!!! That Nya Reed vault score had me screaming. You could see it happening from a mile away. Frankly, we knew it would happen before the meet started! But still so devastating!!!

Oh man I really wanted that Cal upset, that was so close.

Arguably, Cal should have advanced based on Florida’s performances and over scores
But Cal had several misses themselves. Bordas needed to hit a 9.900 on BB, Watterson’s UB fall meant they needed to count a 9.800 instead of Watterson’s potential 9.900. Clausi’s VT error alone would have propelled them past Florida because they really needed that strong 1 1/2 from her and she did not deliver.

It isn’t as though Cal was under scored as opposed to Cal not taking advantage of Florida underperforming.

Michigan looked great and I hope they repeat their performance in finals. Exciting gymnastics, clearly executed, and a hunger and fired up group. THAT was a championship performance and even when their star Wojick falls off UB it was not a huge deal because everyone else did their job.

Go Big Blue!!! It has long been overdue.