I love this video put together by YouTube user Gymnastea. (No idea who that is).

It looks like there will be very little competition for Steingruber unless she outright falls and the race will be for silver and bronze.

I agree Steingruber should run away with the title since the rest of the competition has neither the difficulty/amplitude/form to challenge 2 hit vaults from her, but her DTY is foul. She does almost a full 1/2 turn before even leaving the table. The form/body position are also pretty rough. I wish she would go back to the tsuk 2/1, but I imagine the DTY is less pounding on her body, so I get the switch.

Ha she should try and get it credited as a Cheng! Ha

I mean, considering some of the crooked block positions that get credit, I wouldn’t be surprised if the judges accepted it LOL

looks to have about the same degree of turn onto the table as Cheng did in Beijing!

Eythora will not fo to Europeans because of a slight ankle injury she sustained at the Ned-Bel competition. Derwael is also not competing, soooo who will win bars?

I’d have to go back and look at who is going again because I forget who is being left home in favor of eligible AAers.

Downies are staying home too I think?

Could mean it would go to a Russian any of the 3 could take it. Urasova got 15 at Nationals IIRC

LOL, I don’t think she’s twisted enough to claim Cheng credit. It would not be allowed anyway because the two vaults must have different post-flights.

It does occur to me that, because she’s a right twister and also a right Tsuk entry, she could maybe go even further with pre-flight twisting and do a Tankousheva vault. (3/4 twist on and Tsuk full off) It’s worth the same as a DTY (5.4) but probably would pick up fewer deductions if she could do it. Here is what it looks like from the originator, Nikolina Tankousheva, at 2002 Worlds. Note that she does the same post flight, a (true) Tsuk full, in both vaults. 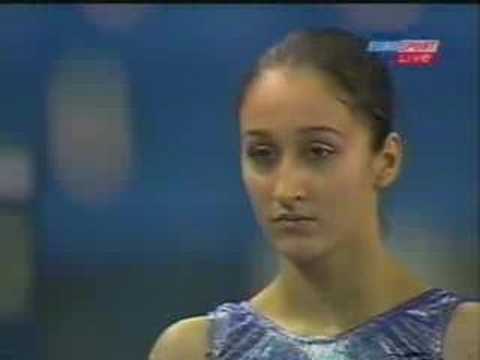 The only other person who did it is Kang Yun Mi. But Kang really was closer to doing a Cheng than a Tankousheva here, and I sometimes think the Cheng should have been called the Kang. Look at the slow motion. Her hands are a bit sideways but clearly closer to forward facing than backward facing. It’s no wonder she didn’t get enough height… https://www.youtube.com/watch?v=AwWEEUPCJt8

Isn’t this credited as Lucconi entry (RO full on, layout full off)?

I suppose any of the Russians, Seitz, possibly Villa are the front runners for UB placings. I’m not really familiar with everyone though and am probably missing someone very obvious.

That seems to be spot on for UB.
Maybe possible Zsofia Kovacs could contend but she’s not up there with Seitz or the Russians sowe shall see.

So, looks like Jennifer Gadirova has been replaced with Phoebe Jakubczyk. (https://twitter.com/ukrgymn/status/1382697726324961280)
Great chance for PJ, but hope that Jennifer is OK.

That sounds like an injury, considering Jennifer was the best on the team last we looked. Shit.

Sucks. I was eager to see how she looked, particularly against the Russians.

Amelie Morgan is more than capable of securing a +1 I would say just as capable as Gadirova and then some. Her 2019 European Championships AA qualification score is higher than what Gadirova scored in the AA at the 2020 American Cup. This is with Morgan making a major error on FX.

I hope you’re right. I had HUGE hopes for her in 2018. Reminds me of Maggie Nichols style.

We may be massively underestimating Iordache. In this training vid, she looks back to competitive form on bars and beam. Some bent knees on kips and giants and no Church, but she has tightened her form since Euros 2020 three months ago. The Maloney + Hindorff is a significant upgrade.

I really don’t know Amelia Morgan so I won’t count her out, but who are the other main AA competitors? Listunova, Urazova, Melnikova(?), Steingruber, De Jesus dos Santos, and Villa? It would be really incredible to see Iordache win. She comes in as the defending BB and FX champ. Team silver behind Ukraine.