The first of three(?) Chinese WAG Internal Trials was yesterday. Golden China is a very reliable fan and I am thankful for them, so below is their post: a much better writeup than I would offer. Also…Ou Yushan, folx~~. Perhaps she hasn’t been training FX as much post-Nationals because she was working on regaining the DTY, post-knee injury. She brought back her switch ring on beam, in combo no less.

ALSO, check out Golden China’s blog. You may remember this user as Judith from the boards, with the Sui Lu profile pic 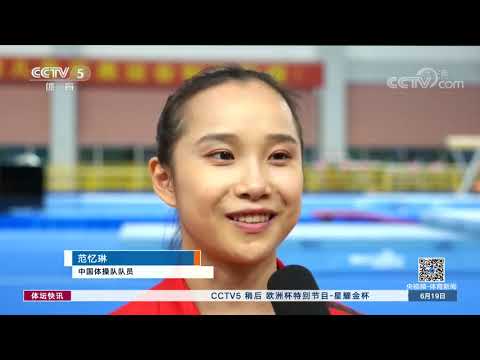 The first Olympic internal test took place in Shanghai yesterday. Both Chen Yile and Li Shijia did not compete in the test. Li Shijia injured her knee while warming up a DTY, the injury is said not to...

The first Olympic internal test took place in Shanghai yesterday. Both Chen Yile and Li Shijia did not compete in the test. Li Shijia injured her knee while warming up a DTY, the injury is said not to be serious. Zhang Jin had a steady competition, winning first place with a score of 56.399. She said she didn’t think about the rankings beforehand and was just focusing on her gymnastics. Tang Xijing and Lu Yufei played safe on vault (no double twists) and placed second and third respectively. Tang Xijing did well, but she wasn’t happy with her own performance and said she does better in training. Lu Yufei made a mistake on her first event (bars), but she performed well on the other events. Ou Yushan competed her DTY again and she received a huge score on beam (15.633). I’m not entirely sure why she didn’t do floor, but she probably would have won if she had done floor. Wei Xiaoyuan had a fall on beam (the only fall I believe), but she did really well on bars to score over 15. Liu Tingting performed steadily on both bars and beam. Qi Qi has recovered her DTY (still needs improvement) and did well on floor again.

Some gymnasts were eliminated after this test, but they have not made an announcement about this. The second test will take place on July 2nd.

so of note, Wei Xiaoyuan has a 6.7 bars D score, and she has the highest 2 event D score total for ub+bb, so she’s very much in contention for the +1 spot, as is Guan Chenchen who at Nationals and here is consistently scoring very high on beam. Chinese delegation has said they’d like to take a beam specialist, and Guan is beautiful.

The depth in China is astonishing. What a renaissance I smell brewing. Dripping in style.

Yeah, with beam scores like that, Simone’s bb gold hope is looking unlikely. And I wonder if Russias big three scores can hold on to the silver against that onslaught. At least Fan is a +1 athlete so her scores won’t matter.

Let’s not forget that Chinese scores are often inflated. They also tend to succumb to the pressure of competition at Worlds and Olympics. This particular group has consistency issues.

China’s team looks like one of the more difficult four person puzzles to put together.

China’s scores are typically the opposite at domestic meets! Often lower than FIG standards.

Fan Yilin is clearly peaking at the right time. Her execution here is a reminder as to why she hasn’t upgraded this routine. The score is legit and could go a few tenths higher at the Games. Her dismount is looking higher now, she’s releasing at the perfect moment.

Twitter user @sui_luwu does a good breakdown of the likely team and the politics that come into play. Fan Yilin is locked of course, and then the near locks for the 4-person team are Lu Yufei, Ou Yushan, and Tang Xijing. Fan Yilin and Lu Yufei are both from NT3 which has much less political influence than NT1 and NT2, so it’s very unlikely that a third NT3 gymnast like Zhang Jin will make the Olympic team, despite filling in a hole on VT.

Tang Xijing is from NT2 and Ou Yushan is NT1. Li Shijia is a part of NT1, is from Sichuan, and has a DTY. So if she is healthy enough to compete, she is the likely candidate for that fourth spot. If Li is not ready, the fourth team member may be a VT/FX gymnast (ZJ/QQ), or a UB/BB gymnast who can provide a big score (LTT/WXY). Guan Chenchen remains a likely candidate for the +1. 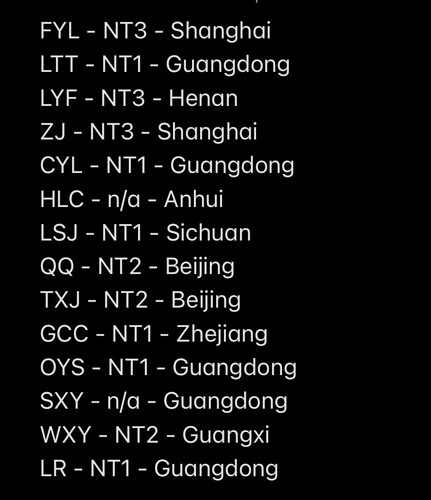 I think it is hideous that internal politics might keep Zhang Jin off the team. Hasn’t she been top 2 or 3 at every competition they’ve done recently? Or am I mixing her up with someone else?

cast to handstand with legs straddled

cast to handstand with legs straddled

China’s scores are typically the opposite at domestic meets! Often lower than FIG standards.

This used to be true (they’d have the judges take .3 for .1), but it hasn’t been for a while. Certainly not this year. There was some very healthy overscoring at Chinese Nationals.

Sorry, but no. Fan Yilin is overscored.
The routine you posted went 8.733 and I have it at 8.1 so yeah definitely generous on the CHN judges. This is not unusual, China liked to inflate scores on UB specifically to mess with the rest of the World, but since UB is now no longer their strength (Russia and arguable USA and Germany beat them) they are releasing huge scores on balance beam, which is the weakest event of every nation in the top 8 besides Netherlands and potentially France.

I agree, makam, that it is hideous internal politics might keep Zhang Jin off the team, considering her great AA performances and newfound consistency. However, if Lu Yufei competes her DTT, then Zhang might not be be top 2 on a single event. Ou and Lu can outscore her on vault, as they do on floor.

I’d say 8.3-8.4. The Gienger and clear pike blind are better, but they are still liabilities, and she seems to always have position issues on the dismount.

I worry Nina’s lack of Gienger is a nice buff for her E-panels in terms of locking in gold. Giengers are E-panel voids, especially between the bars.

I was at 8.5. Here’s where I differed from Concorde. I will say that the bent arms on her piked stalders were hard to see clear enough to decide whether to deduct. That’s also not something FIG has been super clear about, best I know.

Doug, you had her at Chinese Nationals EF with an 8.5 for a far worse routine I think.

Do others not see improvement from Fan?

Giengers are E-panel voids, especially between the bars.

I never understood why shap + gienger became the .2 CV du jour for the Chinese. Literally every single one looked majorly dumpy.

I see improvement. I’d give the Nats EF set ~8.0, so I “thought” this was 3-4 tenths better. However, the Nats EF set also did not have the clear pike 1/1, which would probably create more of a separation/improvement between the sets.

I love Fan and I hope she medals. I just worry she lacks the D firepower and E logistics to ever beat a solid Nina, according to the FIG.

Is the angle different?

Because it means they don’t need to Shap 1/2

According to a very reliable twitter user, Tang Xijing has regained her DTY, rendering Zhang Jin more obsolete as expected. Hopefully Li Shijia is well for the Games, because she fits perfectly into the team. With very clean routines, China could feasibly score:

A whopping 10 points higher than their team total in 2019. It won’t happen, but I can dream!

Ou Yushan’s beam from the Internal Trial. She scored a 15.6 with a 6.5 D score. I had her E score at 8.8. She doesn’t have the pedigree yet, but I’d argue she’s China’s best beam worker since Fan Ye, maybe even Yang Bo lol

And Wei Xiaoyuan’s new 6.7 bars from training. If Lu, Tang, and Ou are all vaulting doubles, then Wei could be selected for her UB/BB prowess. I had a 9.1 E score lmao. That DLO 1/1 could easily be a Ray too. Wei will have a harder time making the Olympic team than she would winning a medal on bars in Tokyo…